The American College of Sofia (ACS) is one of the oldest American educational institutions outside the United States, tracing its roots to a boys’ school founded in 1860 at Plovdiv and a girls’ school founded in 1863 at Stara Zagora. The school was shut down in 1942 by the Bulgarian government and reopened its doors to a preparatory class of 100 students in September 1992. ACS is among the top private college preparatory schools in the Balkans. Admission is highly selective. Integrating the values and best practices of American pedagogy with the rich educational traditions of Europe, we seek to develop critical thinking, lifelong intellectual curiosity, leadership, and collaboration among multi-talented students of various social, cultural, economic, and geographic backgrounds. ACS graduates are accepted into some of the most prestigious universities in the U.S. and Europe and are valued critical thinkers and problem solvers able to set clear goals and achieve them. They are engaged in social issues and are able to compete with outstanding students world-wide. The ACS curriculum is demanding and all courses are taught in English at honors level. We provide a rigorous university preparatory education to motivated young people and are fully accredited by the Bulgarian Ministry of Education and Science, and the Middle States Association of Colleges and Schools, as well as the International Baccalaureate Organization. Currently the IB Diploma Program is only available to non-Bulgarian international students. The majority of students receive both a Bulgarian diploma and an American diploma 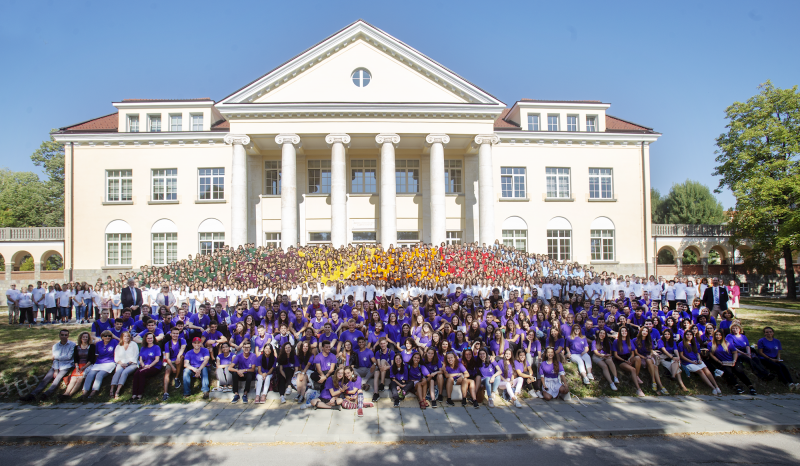 ACS is an approved secondary school under the auspices of the Bulgarian Ministry of Education and Science, and all graduates receive Bulgarian diplomas, whether or not they have met ACS’s criteria for the American diploma. ACS is fully accredited with the Middle States Association of Colleges and Schools and the International Baccalaureate Organization.

ACS’s student population of 872 is 97% Bulgarian (with 15% of students coming from outside Sofia), and 3% international students who represent 10 other countries. There are 161 students in the Class of 2019. Admission to ACS for Bulgarians is based on the results of an entrance examination in Bulgarian language, mathematics and analytical skills. Knowledge of English is not required. Each year the highest scoring 180 students in the country are admitted to the College. Last year, 46.5% of applicants who applied to the College were admitted, and 72.0% of the admitted students enrolled. International and Bulgarian students who have studied abroad are admitted on the basis of English proficiency and a strong academic record in their previous school. Annual tuition for students is 6700 Euros. All families who require financial assistance may apply, and about 31% of the students in the entering prep class received a reduction in tuition fees.

ACS has five academic grades: prep grade (in which emphasis is placed on intensive English training) and the four high school grades, 9th _ 12th. ACS’s curriculum for Bulgarian diploma candidates is largely dictated by the Bulgarian Ministry of Education and Science. A summary of ACS students’ weekly academic schedule by grade level is charted below. In grades 9-10 all courses are taught in English except Bulgarian and foreign languages. During grades 11-12 all courses are taught in English except Bulgarian language and literature, foreign languages, Bulgarian geography and history (in grade 12). Profiles are areas of academic concentration. For ACS students graduating after 2021 we are offering a wider selection of profiled education in the following areas: math, software and hardware technologies, humanitarian sciences, foreign languages natural sciences and entrepreneurship.

At ACS, the IB program is available only to International Students. The Class of 2019 is the thirteenth ACS class to have its non-Bulgarian members graduating with either an International Baccalaureate (IB) diploma or subject specific certificates. In 2018 five seniors sat for the full IB diploma with an average score of 30.5.

If you would like to learn more about partnerships with American College of Sofia we would be delighted to discuss opportunities for us to work together.